The Association of Hydraulic Services Consultants of Australia

The Association of Hydraulic Services Consultants of Australia was founded in NSW in 1974. In 1995, a meeting was held in Perth attended by many of the leading Hydraulic Services Consultants in WA It was agreed by all that a WA Chapter of the AHSCA would be developed. In 1996 The WA Chapter was formally incorporated with an official launch held at the WACA on the 14th March 1996.

The Chapter was launched by Mr. Robert Welch who was the Australian and NSW President of the AHSCA at that time Mr. Philip Wright was the inaugural WA Chapter President and a founding member of the chapter.

Since its inception, the WA Chapter has grown in recognition, resulting in acknowledgement of our members by Commonwealth, State and Local Government authorities and other Industry organisations. 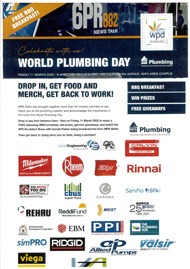 DROP IN, GET FOOD AND MERCH, GET BACK TO WORK!

MPA Skills has brought together more then 30 industry partners to say thank you to the plumbing industry and acknowledge the importance of the trade this World Plumbing Day.